I love cookbooks. I must have upwards of 50 of them, tucked in my “cookbook cupboard” or lined on my little “cookbook shelf” under the slot in the kitchen cabinetry where the microwave oven is.

I collect them and enjoy trying recipes from them.

But my all-time favorite is a set my parents gave me about 15 years ago.

As a kid, I loved this set, not only because its publication year was the one in which I was born, but also because it came in encyclopedia form, and I was the kind of kid who read everything. These books are stuffed full of interesting history and information about the various ingredients, foods, and the cultures that inspired them. Plus, the title has Cookery in it. I love that word in and of itself.

Luscious pictures of cakes from the “chocolate” section 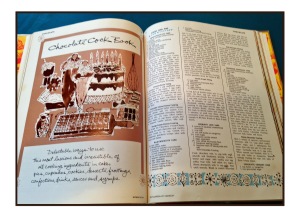 Oh, and it’s got pictures and illustrations, too, all delightfully vintage. Which means, I guess, that I’m vintage too, since the books are as old as me. 🙂

I really enjoy looking up recipes (there’s an awesome homemade custard recipe, pies, breads, holiday foods…and of course recipes from just about every culture in the world that you can imagine, since it’s an encyclopedia of cooking).

Today, I looked in Volume 3 to find a quick recipe for corn chowder, since that’s what my kids really wanted for lunch (and I knew I had the ingredients – or some that were close enough – on hand). A few minor substitutions later (i.e. diced ham instead of salt pork, and regular milk instead of evaporated), and I had lunch ready for them.

Anyone else have a favorite cookbook – or set?