So, this is my second recipe post in a row, I know. What can I say? I like to cook, and the cooler autumn months make that even more enticing.

You don’t have to like squash to like spaghetti squash. It has a very, very mild flavor, and is a great way to sneak in more vegetables and avoid some of the simple carbs that can make you feel logey (rhymes with hoagie for those unfamiliar with the word. Logey = sluggish, and is a word derived from Dutch, used in the Northeastern part of the US, particularly in NY and MA! 🙂 )

Start by preheating the oven to 365-370 degrees F (depending on how “hot” your oven is), and washing a large, smooth spaghetti squash. Slice it vertically.

Scoop out the “guts” (very much like removing seeds and fibers from a pumpkin when Halloween carving time comes along) and discard them. Now it’s ready to season.

Either slice up some garlic (I like a lot) or buy it pre-chopped from the store, which is what I did, because I didn’t have other garlic handy.

Note: if you use pre-chopped garlic, you may have to dry it a bit if you want it to “roast” and turn into those brown bits that taste so good.

Place the garlic in the cavities of the squash and then sprinkle liberally with salt and pepper. Add a mixture of olive oil and vegetable oil (half and half) to the cavity and smear all over the visible parts of the cut squash.

Roast in the oven for about an hour. Mine took a little longer. You’ll know it’s done when the flesh pulls back from the skin without too much resistance and begins to “thread” like spaghetti. Use two forks to scrape all the squash from the inside of each half.

It’s ready to serve! Put into a bowl and season with a little more oil, or some butter, and test for whether more salt and pepper is needed. 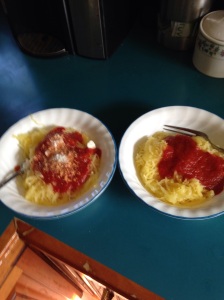 It’s great as is, but it’s also delicious with your favorite pasta sauce (with or without meat or a sprinkle of parmesan cheese – use the squash just like pasta). If you use a tomato-based sauce, though, let the squash sit for a few minutes first; otherwise, it picks up the liquid from the tomatoes and gets a little watery.

That’s it! Delicious and nutritious.

Has anyone here tried this squash before? Any fans of it with other recipes for using it that you love? Please share in the comments. 🙂

2 thoughts on “Spaghetti Squash Made Easy”